Social media has been a hot topic for months now. Weve heard everything from its here to stay to companies not involved are losing out on opportunities. Though these statements are typically true, do we know why? Do we know why social media is adopted by more B2B companies every day?

Companies that are still asking why are those who are skeptical about the effects of social media. A common pushback industrial companies have is it is not for B2B; there isnt a relevant audience to reach on social media.

It is great to report that this is not true: the manufacturing and industrial space is already widely represented on various social media platforms. This month we will be focusing on the top social media channels, as well as the industrial/manufacturing thought leaders who actively participate on these channels. This week well focus on Twitter.

Twitter can be described as a micro-blogging site where users are limited to 140 characters per post, answering the simple question: What is on your mind? It was founded in 2006, and has about 500 million users. Today, Twitter has expanded far beyond users sharing what they had for breakfast. Twitter users are engaged and share valuable information they feel would interest their followers. Users are becoming more mature and making the social site demographically relevant for industrial companies. As of June 2012, Twitter users between the ages of 35  55 make up 58% of overall users.

Demographics however are not the main reason why product manufacturers and job shops should participate on Twitter. The main reason is because the manufacturing industry is actively involved in social media, Twitter being one of the top sites they engage in. As a player in the industrial space, it is important to connect with the influential leaders to help set your company apart from the competition and give you a voice to share your expertise. As Charlene Li, co-author of Groundswell said, Twitter is not a technology. Its a conversation. And its happening with or without you. As an industrial company, the time is now to start getting involved on Twitter.

Twitter users are responsive to quality tweets. Quality tweets are those that include an interesting snippet or clear short description of a current trend or update, along with a link to compelling, relevant content.

In addition to content quality, it is also important that tweets are easy to find. Twitters search is fueled by hashtags (#) that help users categorize their tweets and make it easy for other Twitter users to find it. Hashtags basically segment content by the topic and who might be interested in that content.

Holding conversations with people is crucial, but also what differentiates your company from the rest. Everyone likes a company that actively participates, shares its opinion and listens to others. Why? Because it humanizes the company and makes them more relatable.

Users on Twitter engage by reposting their followers tweets, answering questions a follower might have, or sharing/suggesting relevant content to spark conversations and opinions. Here is where the Retweet or RT function comes into play. Retweeting another users content is the utmost form of flattery. You are basically telling them their content is so good you want to share it with your followers. Retweeting sparks connections and conversations, giving companies a huge opportunity to expand their reach.

Now that we have an idea of how Twitter works and who uses it, lets explore what most industrial companies dont know to be true: The industrial space is highly represented on Twitter.

Industrial thought leaders are very active on Twitter. The types of content they share are similar to what is stated above, but with a greater emphasis on industry news and trends. A common trend that is circulating through Twitter is Reshoring or Made in America. By getting involved in similar conversations, you can interact with publications/associations and share your opinion, consequently expanding your reach and visibility online. In addition, youll build credibility and thought leadership of your own.

Below are examples of some of the top industrial associations and publications that are actively engaging with followers. When reviewing these examples note: 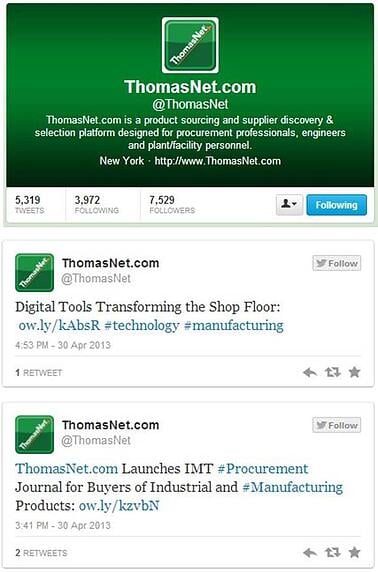 SME is a premier source for manufacturing knowledge, education, training, and networking, as well as a leader in manufacturing workforce development.

Note: SME recently changed their Twitter handle to @SME_MFG. It is no longer @SocMfgEng.

Manufacturing Engineering Media is the premier source for news and in-depth technical information about manufacturing in North America. Their editorial content is aimed at a general manufacturing audience but with a special emphasis on the latest manufacturing technology in the following areas: metalworking, lean processes, quality, software, workforce development, aerospace & defense, motorized vehicles, medical and energy.

The Manufacturing Leadership Summit offers a must-see slate of events and presentations for manufacturing executives. Arranged around the theme of Bold Ideas for a Better Future, the Summit brings together the best minds inside and outside the manufacturing industry to provide cutting-edge insight on the trends and challenges manufacturers face in the years ahead.