With Thanksgiving officially here, many people are left to reflect on another year gone by and remember what they’re most thankful for. This year was an exceptionally great one for me, so deciding on what I’m most thankful for is a piece of cake (or pie…).

This month I was able to take part in something most people don’t even know exists — a NASA Social event. These events are designed to bring together aerospace enthusiasts who actively follow NASA on social media. As a social media professional with a penchant for science-y subjects, this was an opportunity I couldn’t pass up. 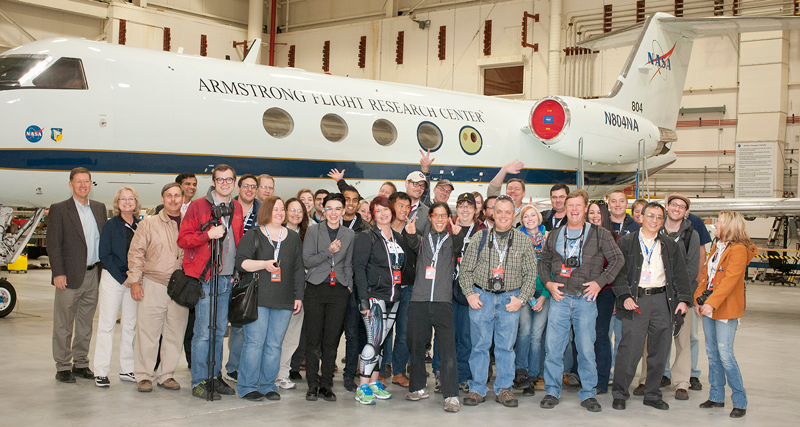 Nestled deep within the Californian high desert region, surrounded by Edwards Air Force base, NASA’s Armstrong Flight Research Center (formerly Dryden) opened its doors to teach about three-dozen self-proclaimed aviation geeks a thing or two about NASA’s contributions to society. After spending two days learning the many ways “NASA is With You When You Fly,” I’ve pulled together the top 5 reasons I’m thankful for NASA (and you should be, too).

Not every organization would let you sneak a peek of what goes on behind closed doors. For this NASA Social event, nothing was off-limits. We toured the Experimental Fabrication Lab, got up close to historical items like the Lunar Landing Research Vehicle, and were even encouraged to reach out and touch the flexible wing flap innovation now under development. This is something that we’d all read about in the news, and having the ability to closely examine the design and actually feel this rigid material that will bend without any hinges was an incredible experience.

2. Commitment to the Public

And speaking of the flexible wing flap, officially known as the Adaptive Compliant Trailing Edge (ACTE) project, this is just one example of the work being done to make people’s lives and the world at large better. Conducted in association with the U.S. Air Force Research Laboratory (AFRL) with design and construction by FlexSys, Inc., this product aims to improve aircraft efficiency and reduce noise associated with take-off and landing. A more aerodynamic design will greatly improve sustainability by reducing fuel consumption and emissions. And since sound is a common complaint among people on the ground, having a quieter aircraft design is yet another benefit of this research.

Increasing fuel efficiency in aviation isn’t just a cost-cutting measure; it’s a way to leave the Earth a bit greener than it’s been in past years. By creating new technologies and methods for reducing aircraft emissions, NASA hopes to cut nitric oxide and nitrogen oxide emissions 20% by 2015, 50% by 2020, and more than 50% by 2025. NASA Armstrong also operates two Northrup Grumman Global Hawk unmanned aircraft, as well as a General Atomics Aeronautical Systems MQ-9 Predator B (otherwise known as Ikhana) to monitor remote locations and conduct research in situations that would be dangerous for people – including natural disasters like hurricanes and wildfires.

There are many everyday technologies that can be attributed to NASA research if you look hard enough. For example, every time you employ that automatic braking system in your car, you’re benefiting from drive-by-wire technology. This advance, which uses wires rather than traditional mechanical processes, got its start in Digital Fly-By-Wire (DFBW) aircraft. NASA Armstrong was home to the first test in 1972 with a modified F-8 Crusader, and has been working to further progress the system ever since. As a testament to the reliability of DFBW, the Apollo computer interface box which brought humans to the moon made full use of this digital system.

Everything that NASA does is motivated by safety. Perhaps one of the most impressive examples is the Automatic Ground Collision Avoidance System (Auto-GCAS) currently under development. According to Mark Skoog, project manager and chief engineer of the Auto-GCAS project, the number one cause of fatalities in fighter aircraft is ground collision. To solve this problem, researchers got to work and had three main requirements – Do No Harm, Do Not Interfere, and Prevent Collisions. The goal was to develop a system that would take control away from the pilot only as a last resort, without interfering with other maneuvers. As of right now, the software is being tested by both unmanned aerial vehicles and manned aircraft. There is also a mobile app under development now, which was demoed for the first time in public at the NASA Social event. The app isn’t available for public use just yet, but once it is formally released it will be able to work wirelessly via your cell phone, adding another layer of safety to personal flight.

Overall, the NASA Social event was an eye-opening experience that I hope many more people will apply to take part in. While most people associate NASA with space exploration, there are so many contributions that we use every day in our personal lives that we can thank the Administration for. And let’s not forget, the first “A” in NASA stands for Aeronautics — so the next time you’re looking down from 30,000 feet, remember that NASA is With You When You Fly.