At THOMASNET.com, we are big champions of American manufacturing and reshoring. In fact, we work with suppliers who produce amazing products made in America every day, and we play an instrumental role in helping small- and medium-sized suppliers grow.

But how can we measure growth for the industry overall? A good barometer is the state of the manufacturing workforce. That’s why we will be regularly diving deep into the latest information from the Bureau Of Labor Statistics to take the pulse of hiring in the industry and to highlight sectors that are growing.

Here is our Manufacturing Industry Jobs Update for April 2017 (scroll down for previous releases):

With the addition of 6,000 jobs in April, the manufacturing workforce has now expanded in five consecutive months. The manufacturing industry unemployment rate remained steady at 3.9%.

As far as the U.S. economy overall, employment increased by 211,000 while the unemployment rate fell slightly, from 4.5% in March to 4.4% in April. 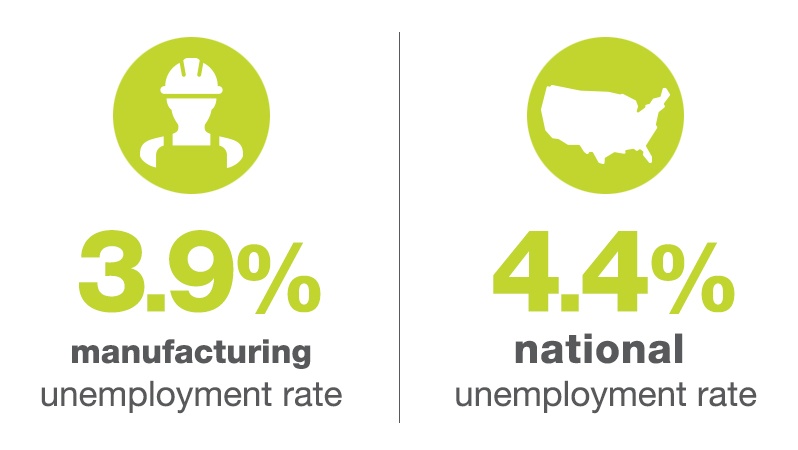 The Food Manufacturing sector continues to expand, adding 9,100 jobs in April. In addition, the number of jobs added within the sector in March was revised to reflect an increase of 2,100 (the March report originally indicated a loss of 1,300 workers). That means the sector has now added employees in 18 consecutive months.

In Machinery, 2,200 new jobs were generated in April, and 1,600 jobs were added in the Chemicals sector as well. Lastly, the Primary Metals sector added 1,500 jobs.

After adding 5,600 new jobs in March, the Fabricated Metal Products sector contracted by 3,500 positions in April.

New Orders And Production On The Rise

According to the latest Manufacturing ISM Report On Business, new orders and production ticked up in April, while inventories grew and deliveries slowed down.

Where Are The Manufacturing Jobs?

THOMASNET.com proudly supports efforts to increase the number of women in manufacturing. These efforts include engaging young girls in STEM education, professional development and networking groups, and supporting women-owned businesses.

Are those efforts working?

*Regional and State Data Is Only Available For The Previous Month

Cobots Are Taking Over The Shop Floor Next Story »